For this blog entry I thought I’d share an example of how powerful amateur videos and information on the internet can be; acting in a similar way that word of mouth recommendations and marketing work. This example focuses on the shaving industry and Gillette in particular, now owned by Procter & Gamble.

Razors, blades, and the marketing for them have changed quite a bit over the past 50 years. You’ve seen the ads. Nowadays the TV spots will often feature some guy looking in a mirror while shaving in a towel, with perfect abs and pecs, zero body hair, perfect shaving cream application that looks like rubber, along with a scantily clad bimbo gawking and giggling in the background. During Gillette’s previous “Mach” era, they would also feature jets whizzing by on screen… what a huge selling point, and oh, how masculine! Their latest product is the “Fusion” razor, which uses five blade cartridges and also comes in a battery powered version. Do you really need 5+ blades and more importantly, why would you ever need a safety razor to be electric? The advertisements have changed with the “Fusion” line but remain just as corny. They now try to feature this fusion technology as something that’s really advanced and high-tech. More recently, they even tried to target video gamers but in my opinion, failed to make a connection. Saturday Night Live mocked the then fictitious 3 bladed razor in 1975, with the “Triple-Trac” skit featuring Al Franken as a caveman searching for a “close shave.” It was only 23 years later, in 1998, that Gillette first introduced the “Mach 3”. It certainly wasn’t the last time the company was ridiculed either. SNL also did a “Platinum Mach 14” commercial featuring John Goodman in 2000 and The Onion published a five blade article (warning – excessive profanity) in 2004, which was of course 2 years before the “Fusion” was introduced. 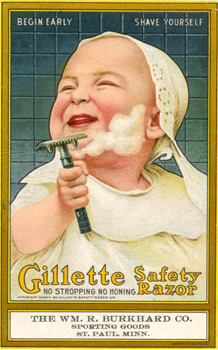 I didn’t check to see what agency or agencies work with Gillette but I’ve never been impressed with their media campaigns. In fact, I think it’s safe to say that I detest them. However, for several years I actually did use a Gillette “Mach 3” razor. In case you are unaware, the company uses a very brilliant freebie marketing campaign. By purchasing information and acting just like a pusher, Gillette targets and hooks young males around the time of their 18th birthday by sending them a free razor in the mail. I received one around at this time and started using it on a regular basis, previously only using an electric razor if I remember correctly. It seemed pretty good at the time, but when I ran out of blades and went to the store to get some more, it hit me; the price, that is. I quickly realized that I had been duped but on the other hand, what other options were there? Schick sells comparable products but their price point is very similar to Gillette’s. Then there are a few generic, single-blade razors that just seemed cheap and, of course, the Bic disposable razors, which also seem to lack in quality. Electric razors are easy to use, but it’s just not the same as a “wet shave.” At the time, I just decided to suck it up and pay for the “Mach 3” refills and did this for at least a few years.

A few years ago, when I was still in college, I was browsing digg.com and I happened upon a video that eventually changed the way I shave. The video itself features a middle-aged guy and it’s far from professional, yet very informative. It revealed a method of shaving that I was mostly unaware of – shaving with a traditional, double-edged (single blade) safety razor – the way your grandfather probably used to shave. That’s right: heavy metal razors with a chrome finish, badger or boar hair brushes, and shaving cream in a tube or bar soap form… I can just hear Tim Allen’s grunts of approval à la Home Improvement. These single-blade double-edged razors aren’t manufactured in the US anymore, and you aren’t going to find any of the necessary supplies for this method at your everyday retail store, but the razors are still made in other countries and you can find some related products at higher end stores such as Nordstrom , Crabtree & Evelyn, etc., possibly at a barber shop, or through the internet. One of the most popular brands is Merkur of Germany (subsidiary of DOVO Solingen), which is the brand I chose to go with – recommended for beginners. Other brands include Edwin Jagger (UK), Parker, Boots (UK), and MÜHLE (German) among others. Because these traditional razors are so durable, you can also buy used razors such as Gillette and Schick products from the 40s, 50s, or 60s. With a little cleaning and some new blades, they’re as good as new. New blades are manufactured by Merkur, Derby (Turkey), Feather (Japan), Persona (Israel), 7 a.m. (Bangladesh), Astra (Czech), Dorco (Korea), and the list goes on. In case you haven’t figured it out yet, shaving with a traditional double-edged safety razor is more popular in other countries.

When it comes to safety, yes, you have to be a little more careful when shaving with a traditional razor but after using one for a couple of years now, I’d claim that there really isn’t that much of a difference compared to the modern products that Gillette and Schick are producing. As long as you take things a little slower and get some practice in, you’ll be fine. These are nothing like a straight edge (carry in your boot) razor – yet, when searching for information on classic shaving methods, people also seem to enjoy those as well.

The amazing thing is that this classic style of shaving has actually been making a bit of a comeback, thanks mostly to the internet. As I mentioned above, I learned about this method by browsing digg and finding mantic59’s YouTube channel. After researching the topic a bit more, before making a decision to try it, I came across sites such as Badger & Blade, a decent-sized community with a message board that contains over 1 million posts. There have also been popular articles on the topic such as How to get that perfect shave on MSNBC, and How To Shave Like Your Grandpa on The Art of Manliness – an article that also landed on digg. The really intriguing thing is that a company isn’t behind the communities or articles. It’s just a more obscure topic that once people learn more about, they’re compelled to try it themselves and tell others. The razor and blade manufacturers seem to have little internet presence so this is really a case of word of mouth information spreading successfully. Many companies would find this internet community to be highly desirable.

Gillette’s ad agency can try all it wants to try to convince me that adding just one more blade is somehow going to change everything. Silly gizmos like the “Fusion Power” just make me shake my head and laugh. To me, this type of thing is on par with those crazy HD sunglasses infomercials. Claim all you want, you’re not going to change my mind. There is a lot of information here and no, the switch to a double-edged razor it wasn’t necessarily a life-changing moment but it would be something that could make a company like Gillette think twice about its current strategies.

Posted in Opinion | No Comments
Bjorn
By Bjorn
Comments

This site uses Akismet to reduce spam. Learn how your comment data is processed.